Warning: "continue" targeting switch is equivalent to "break". Did you mean to use "continue 2"? in /homepages/39/d678902725/htdocs/clickandbuilds/Fragmentary/wp-content/themes/uncode/partials/elements.php on line 909
 fragmentary.org — Daniel Regan
Daniel Regan

Below is a reproduced piece written by Naomi Pallas for BBC News.

Daniel Regan self-harmed at secondary school, at university and at times during his career as an artist. In his most recent artwork, he confronts this personal history.

Daniel sits at a table in the health centre in Kentish Town, north-west London. The centre has an art space, where he works as a curator. Dressed in bright red dungarees, the haphazard scarring on his left arm is visible from under the sleeve of his striped T-shirt. Speaking with a quiet, careful determination, the 33-year-old explains that his scars are not something he feels he needs to hide.

Instead, in Threshold, his latest art project, he uncovers the stories behind them. Daniel began to self-harm at the age of 14. Self-harm is when people intentionally hurt themselves, usually to cope with difficult or painful emotion.

It can take the form of hitting, burning or punching, but for Daniel it was cutting. 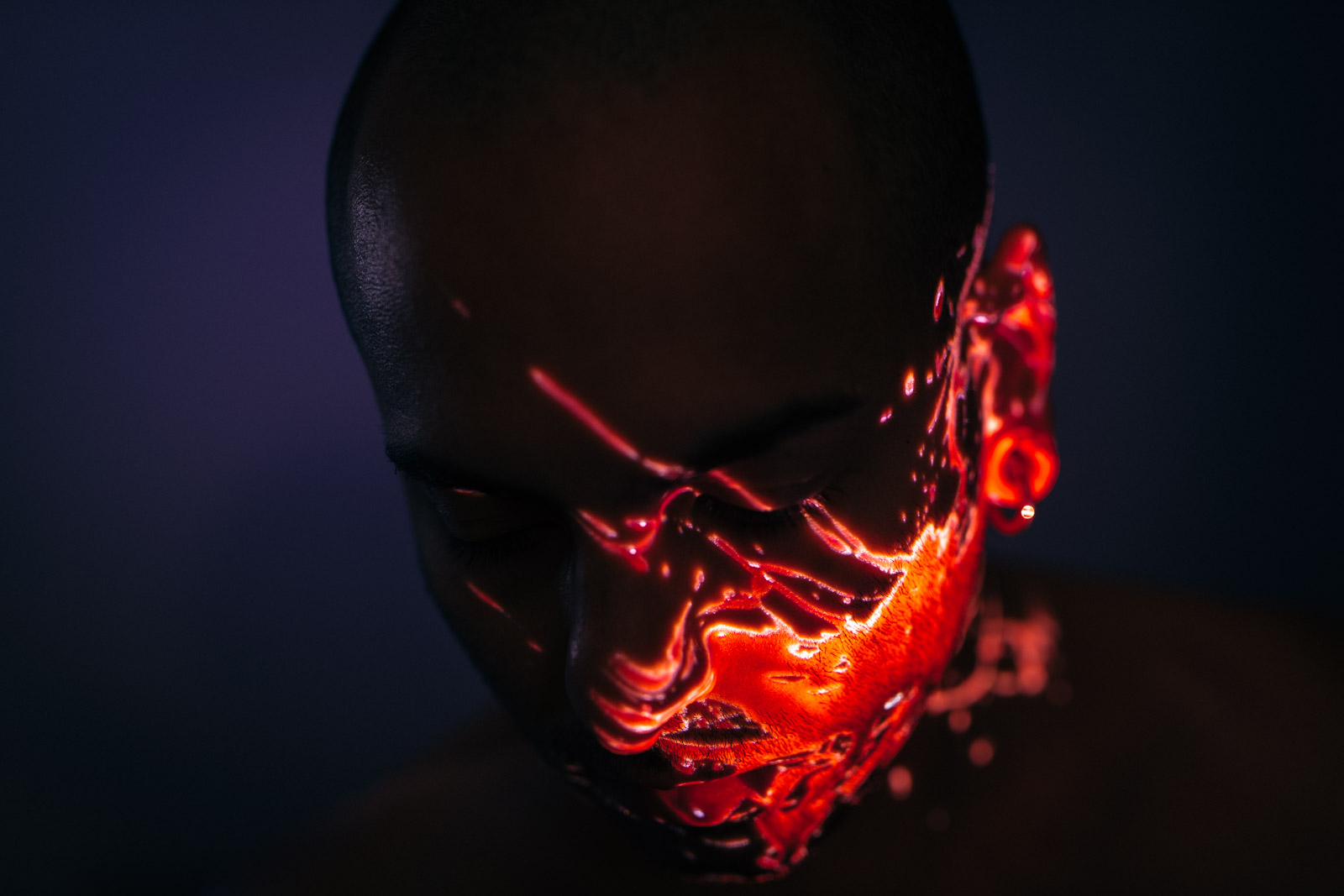 As soon as he hurt himself for the first time, Daniel realised what he was doing wasn’t what most people would find normal. “I remember thinking from that moment onwards that I’d crossed over into a different world,” he says. “I thought that I wouldn’t be able to talk to my friends about this.”

There have been some periods in his life when Daniel hasn’t self-harmed at all. In others, he’s harmed himself intensely. He tries to take each day as it is, telling himself, “You haven’t done it for two weeks, so don’t do it now.”

It ends up with him getting stuck in a cycle.

So when the Science Gallery London put out an open call for art to go in an upcoming exhibition about addiction, Daniel knew what topic he wanted to cover. Although different from the traditional idea of addiction such as alcohol and drugs, he believes that self-harm can become a habit. This has been especially true for him when he has used it as a way to manage difficult emotions.

He realises now that it is also a negative and self-destructive behaviour. 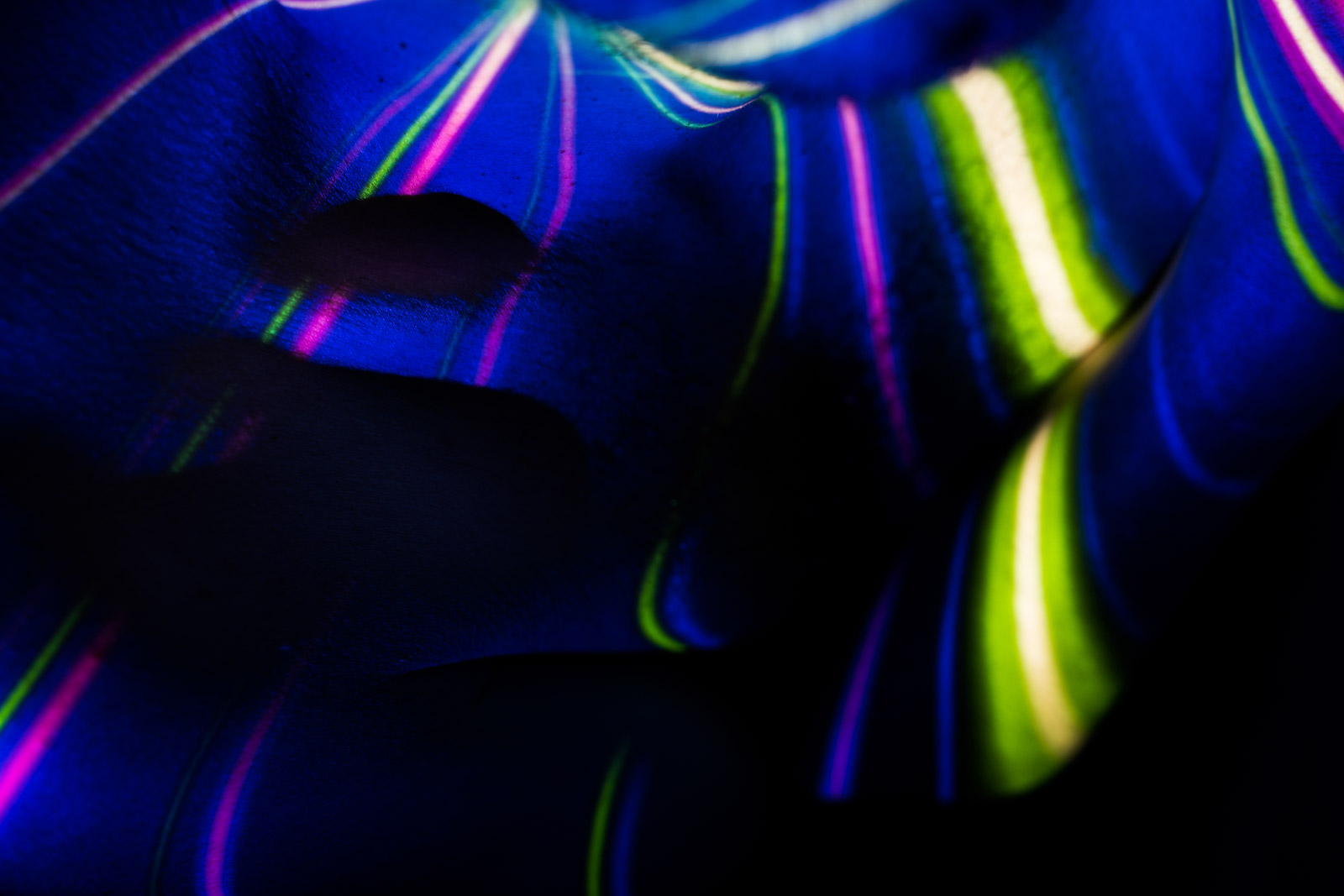 The images in the exhibition were made by projecting moving lights on to Daniel’s body. He chose to focus on certain areas, the chest and the throat, because of their vulnerable location on the body.

Daniel describes himself as a very placid person. There is only one person he ever gets really angry with, and that’s himself. By projecting red light on to his face, he is representing the feeling of rage he directs at himself when he self-harms.

“Self-harm isn’t a positive long-term coping strategy, but for me it has served a purpose,” says Daniel. “I’m aware it’s not a positive purpose, so I don’t want to describe it as a positive act because it’s not.”

For Daniel, the desire to harm himself comes and goes, and the glowing and fading lights projected on his body represent these changing emotions. 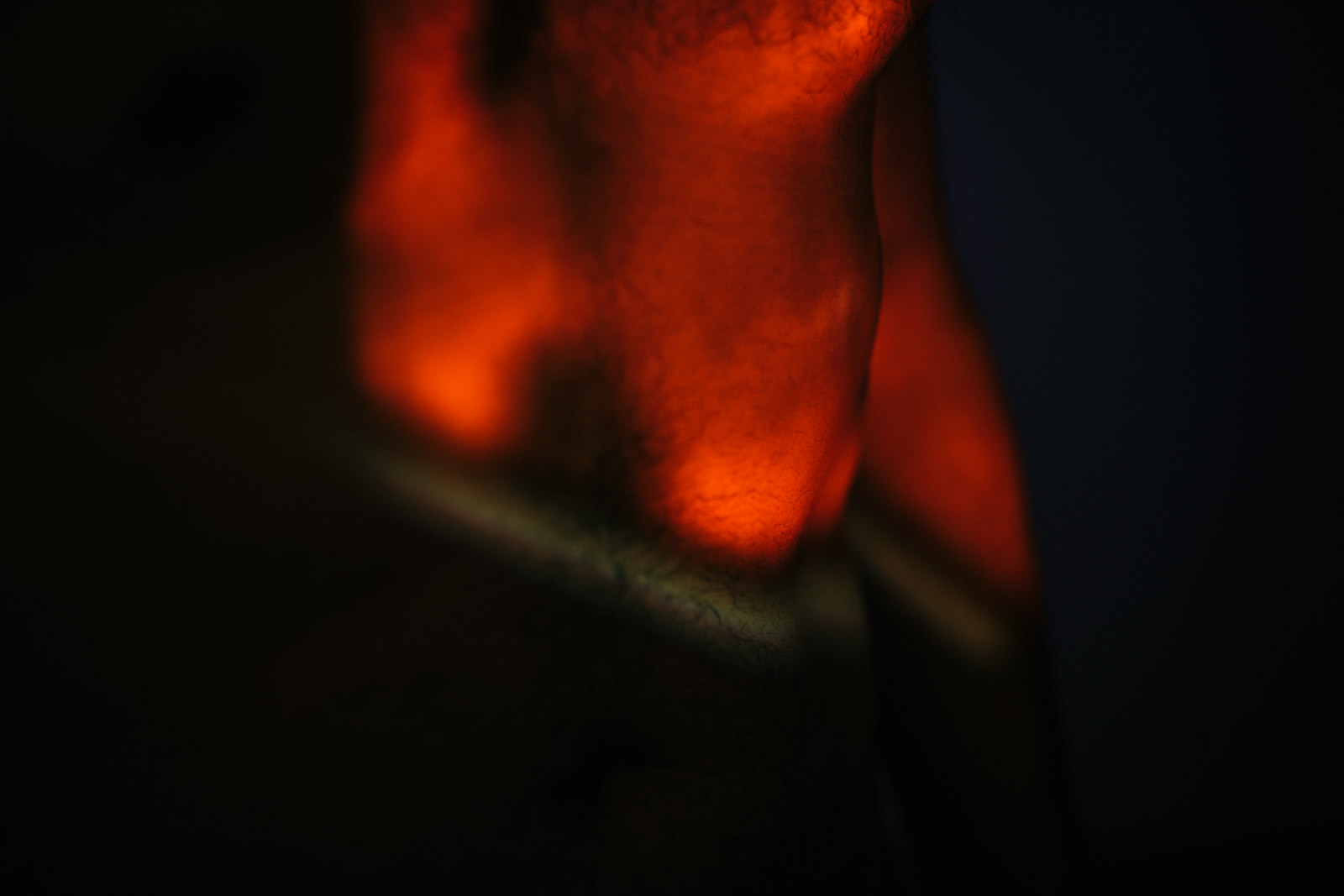 Creating this work is important for Daniel for a number of reasons.

A survey of 11,000 14-year-olds by the The Children’s Society, released at the end of August, found 22% of girls and 9% of boys said they had hurt themselves on purpose in the year prior to the questionnaire. Based on these figures, the charity estimates around 33,000 boys had self-harmed over a 12-month period.

Daniel can’t remember seeing any men who self-harm sharing their experiences in the media, which meant that growing up he never felt his were properly represented. And from his time spent in group therapy, he knows that other men feel this way too. 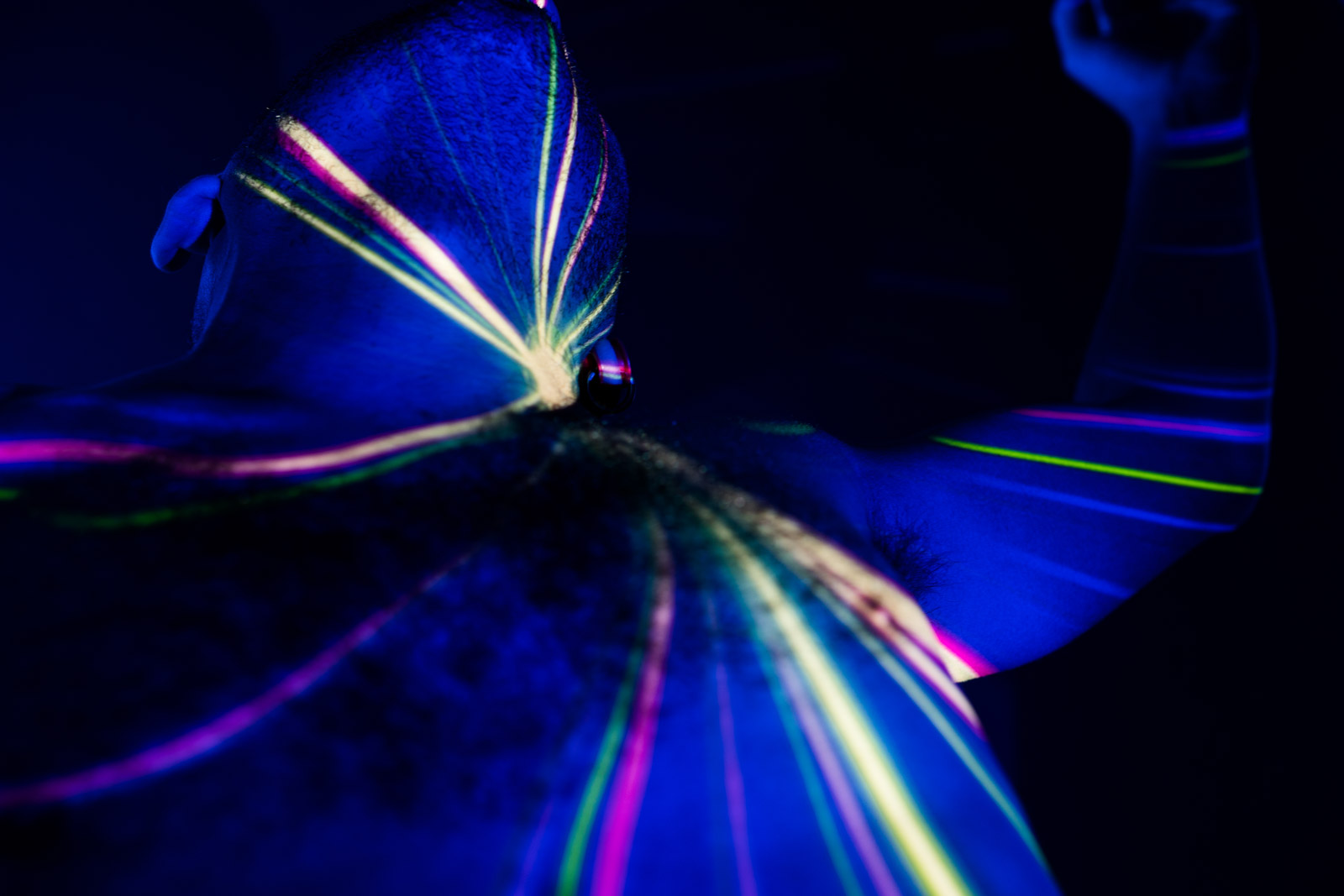 Making his artwork was also an opportunity to change the kind of images that can be seen around self-harm.

Social media sites such as Instagram and the blogging platform Tumblr feature graphic images of self-harm. A study from last year found that around 60% of posts about cutting on social media contained explicit content. Often these images romanticise self-harm.

Daniel has first-hand experience of this. He’s been contacted by people who want to show him their Instagram profiles, full of photographs that he considers to be explicit.

In his work, he made the decision to only show images of recovery and healing. “That was a very deliberate move. I don’t want people to feel overwhelmed by something that feels excessive.”

Creating his artwork has given Daniel the chance to talk to his friends and family about self-harm on his own terms. Although he knows the people around him are willing to talk openly about mental health, Daniel believes sometimes they struggle to know what to say to him.

“It’s another way for friends and family to interact with my scars without having to ask me about them.” 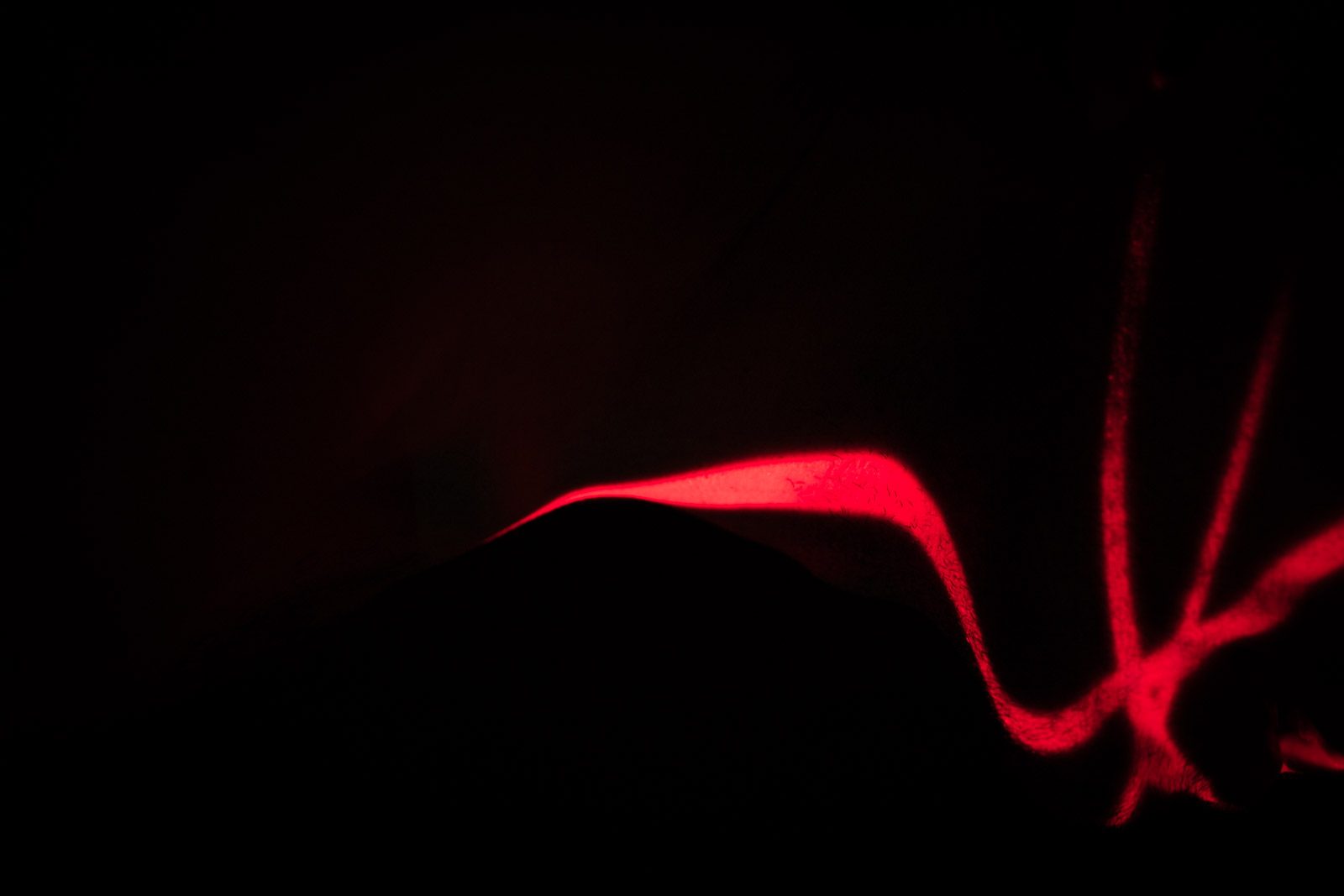 Although Daniel says he can’t rule out self-harming in the future, he has since found other ways to manage his emotions.

“I just put it down to something I’ve experienced, it’s who I am. It’s just part of who I am.”

Daniel Regan’s art will be on display as part of the HOOKED: When Want Becomes Need at the Science Gallery London until 6 January 2019.